What is a Cryptocurrency Wallet?

Cryptocurrency wallets are the digital currency equivalent of your regular bank account or purse. They let you send, receive and store cryptocurrencies on your device of choice and are essential to the use of crypto.

JAXX and Exodus are two of the most popular wallet services. In this guide, we’ll point out the key differences between the services so you can make an informed choice. 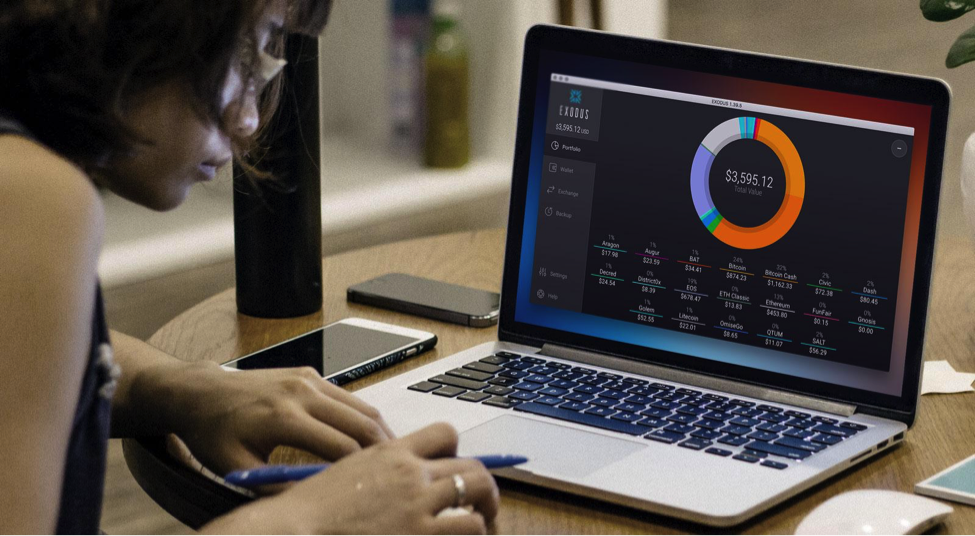 Use Exodus if you: 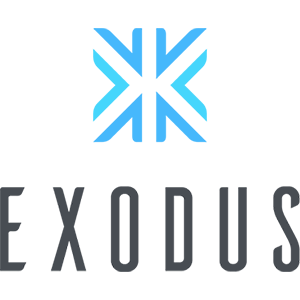 Use JAXX if you:

Both JAXX and Exodus are known as simple desktop wallets. They’ll both guide you through the basics of sending, receiving and protecting your cryptocurrency, whilst also offering you some extra features to explore if you wish.

If you’re new to the crypto word, both of these applications will suit you. In particular, the JAXX wallet will guide you through the key features upon your installation. The blogs of both applications will also give out plenty of tutorials, tips and advice for users of all levels so you can find out more.

The user interfaces are quite intuitive, so even a beginner should be able to navigate both.

Neither Exodus or JAXX have open source code. This means that you need to place a high degree of trust in the developers, as it’s possible for them to insert malicious code into the program and steal your cryptocurrency.

However, both wallets have long been trusted as reputable desktop wallets, so there’s not much risk in storing moderate amounts with either.

Exodus is a computer desktop-based wallet that is only available on Windows, Mac and Linux. They’ve made it clear they they intend to expand into iOS and Android in the future, but the idea hasn’t made it past the planning stage.

JAXX is a far more versatile application, supporting not only Windows, Mac and Linux, but also Android, iOS and Google Chrome. Further, JAXX makes it easy to pair these devices together, giving you a universal balance across your devices. 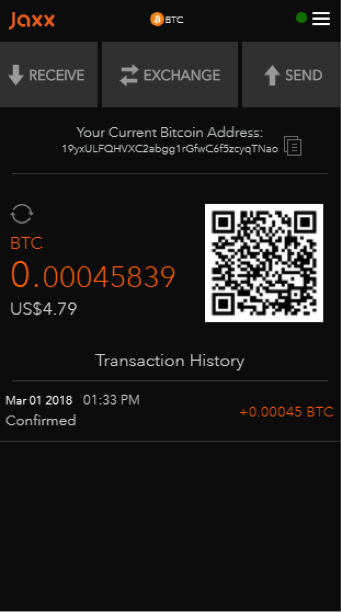 However, Exodus suggests that most traders should use a desktop wallet anyways due to its superior security capabilities. Desktop wallets provide access to secure key signing and two factor authentication, which will help protect your funds.

Most cryptocurrency transactions require a small mining fee so it can prioritised it in the list of payments to be confirmed. This fee can either be adjusted for better transaction times or lower fees.

Although you should be able to use any fee in theory, JAXX offers three inbuilt mining fee options to choose from.

The mining fee options on JAXX.

This is helpful for beginners, but the issue is that JAXX won’t confirm to you exactly how much the mining fee is. It will just add it to your transaction cost. Before you send coins, be sure to check for a spike in the average Bitcoin mining fee or you could waste your funds in an unnecessarily expensive transaction fee.

Exodus is the polar opposite in this regard. The mining fee is predetermined by an algorithm built into Exodus so you have no option, but you’ll at least able to see it before you spend.

The fee is kept at reasonable levels, but you should still always check it before making a payment.

The mining fee information presented on an Exodus payment.

Both wallets support storing Bitcoin, but diversified traders and investors will want to have all of their currencies in a single place.

Jaxx and Exodus both put up a substantial number of supported altcoins, but JAXX is ahead of the game with nearly twice as many. For this reason alone, AltCoin owners might want to use JAXX for the convenience factor.

The Gap Closes if you want to give Exodus Eden a go. Eden is an unstable testing branch of the Exodus wallet, the main benefit being some extra altcoins. Be warned that the use of the Eden comes with some extra risk, such as the removal of customer support.

If you want to use Exodus but one of your currencies isn’t available, check the Exodus roadmap to see the currencies they’re about to implement.

You’ll find plenty of unique coins, including test networks and Ethereum sidechain coins on both.

Both JAXX and Exodus are partnered with ShapeShift, a simple and instant cryptocurrency exchange. This lets you swap cryptocurrencies on the exchange tab of both wallets.

Because the prices are set by Shapeshift, the exchange rates between Exodus and Jaxx don’t vary by much.

However, do note that both wallets use their ShapeShift integrations to generate profit and help fund their projects. Exodus openly states that they apply a 2-4% markup on most exchange transactions, and only reduce their profit margin to stay competitive in popular conversions. JAXX doesn’t openly disclose their markup.

Shapeshift is an instant exchange, meaning that funds will be immediately deposited back into your wallet. However, the high minimum transaction limits might make a traditional exchange such as Poloniex more appealing, despite ShapeShift’s ease of access. 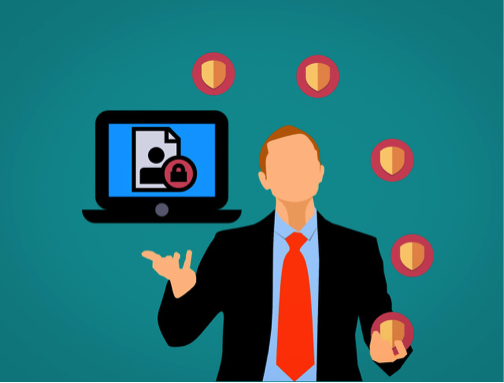 Being primarily desktop wallets, JAXX and Exodus are incredibly similar in technical infrastructure. One of the only differences is that JAXX asks for a security pin for transactions, whereas Exodus asks for a password and backup email.

However, there’s some concern that JAXX’s 4-digit PIN could easily be brute-forced (by guessing with a program) and that it may not even be actively protecting your private keys on a lower level.

Although the security of your devices is your responsibility, it seems that Exodus provides a small extra layer of protection.

Both JAXX and and Exodus provide 12-word mnemonic phrases which are to be used as a backup to your wallet.

Neither wallet has any advantage here, as the quality of your backup depends on how you want to treat it. You could:

Whatever you choose to do, make sure you’ll always have it ready to use. There’s countless incidents of people forgetting their phrases.

JAXX and Exodus put up well developed user interfaces, designed for convenience and easy use. There are few major advantages to each design. 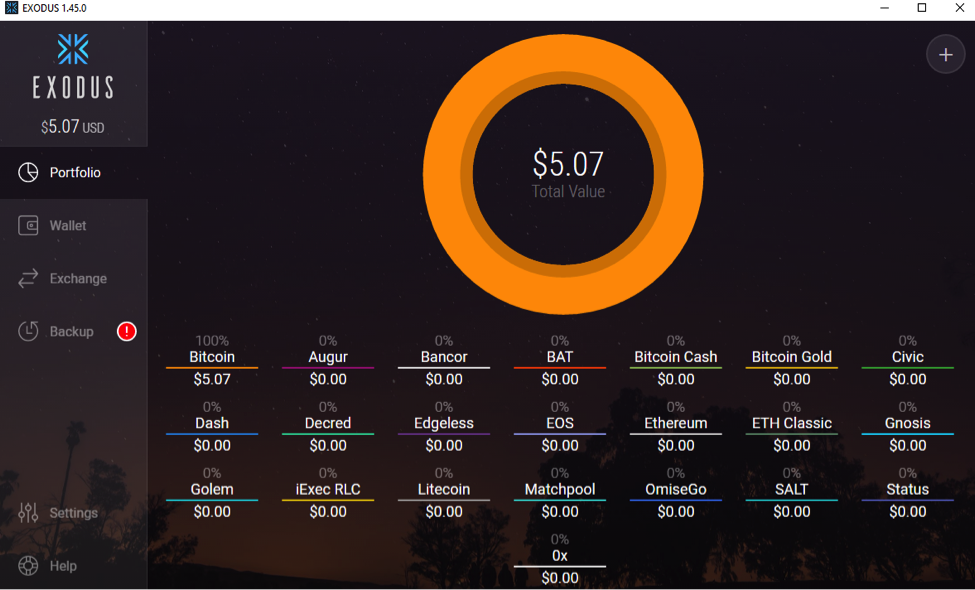 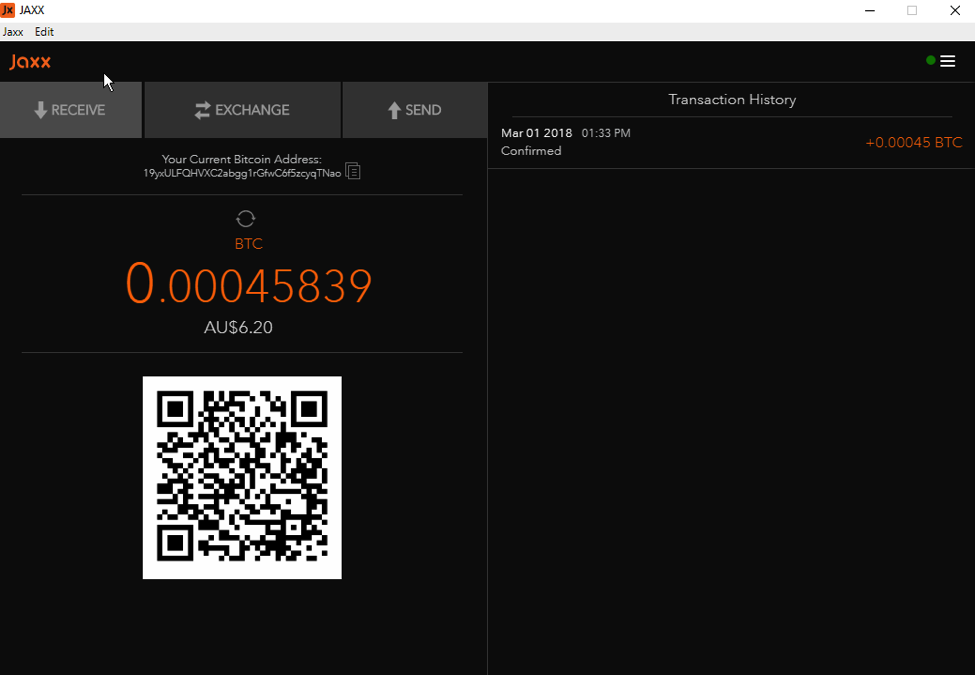 If you want to make your cryptocurrency transactions harder to to track, JAXX is for you.

JAXX allows you to request payments and then generate a one-time crypto receiving address that you can use to receive it. That amount then makes itself back into your wallet as normal, but makes is harders for others to trace.

JAXX doesn’t reveal their plans for the future, but they keep their users up to date through their blog.

Exodus couldn’t be more different. They point out their goals, including the currencies that will soon be moving from the Eden Beta to Exodus in their development roadmap. Some of these currencies aren’t currently available on JAXX, so you should take a look if you’re an altcoin user.

Exodus also has plans to develop a mobile wallet to match up to JAXX’s.

Can’t make up your mind? One of the advantages of cryptocurrency is that you control the private key that backs your Bitcoin, not a bank. We can use this to our advantage to run both on the same funds.

You can also use this method to swap between the wallets if you change your mind.

Step 1. Download both JAXX and Exodus wallets on any platform.

Step 2. Ensure that one of the wallets is completely empty. If not, move all the funds from one to the other. The steps below will only keep one of the balances, and then delete the other.

Step 3. If you currently have funds on JAXX, go to tools and view your 12-word backup phrase. Write this down.

Alternatively for funds on Exodus, press ‘Backup’ from the left sidebar and complete the password process. Once you set a password, write down the recovery phrase it displays.

Step 4. If JAXX is your empty wallet (if it’s not empty, stop and send your funds to Exodus first), go to ‘Tools’ → ‘Pair Devices’ → ‘Pair/Restore Wallet’ and enter your 12 words from Exodus.

If Exodus is your empty wallet (if it’s not empty, you need to send your funds to JAXX first or they’ll be lost), press CTRL + SHIFT + D. From the toolbar that appears, go to ‘Exodus’ → ‘Developer’ → ‘Restore’ → ‘Restore from 12 word phrase’ and put in your phrase from JAXX.

Once you’ve done, you can use both wallets and they’ll hold the same balance. You’re free to send and receive from both.